How likely is it that when one says they just want time to be with themselves , nurture that and not get into a relationship, ever just about that? And it’s not the fact that one might just be trying to find a way to cope with being on their own and maximise the time constructively.

Not that if “prince charming” (the dream guy) cropped up and had everything in the list, you would turn them down based on “I’m still attending me” line.

Or maybe just the fear of repeating history you don’t wanna relive is hindering you to be open to the idea that having hope and putting yourself out there is not so bad either.

This is my observation.

The older the potential bride, the more reluctant and less likely they are to get married.

The thing is, at age 30 and above you have set goals for yourself. You know exactly what you want and most times it becomes impossible to neither change nor adjust those to accommodate someone else’s.

Marriage by nature was made such that the man practically figures himself out and the woman fits into that configuration designed and set by the man.

When you as a fully grown woman who has managed to figure things out for yourself without a man, have to now squeeze into the man’s configuration, it gets challenging and most times leaves you with a hundred ex’s.

A woman that marries young figures herself out within the marriage and plans her life around the configuration. Their set values and principles are moulded around and by the commitment they have made to each other.

So what happens to the older potential bride?

Do you give up your own dreams, plans and values for the sake of having someone and reconfigure yourself into the man’s master plan?

Or do you stick to your own and spend the rest of your life in the dating scene, trying to find the one guy who is willing to take you as you are with all that you have and hope for, and make it work?

Or, do you build yourself a mansion, fill it up with all things beautiful God and man made, fulfil your wildest dreams and desires and live your life happily single ever after?

Or, do you become a nun and forget about ever touching a human being other than their hand?

I would love to hear some views on this one.

Penny for your thoughts? 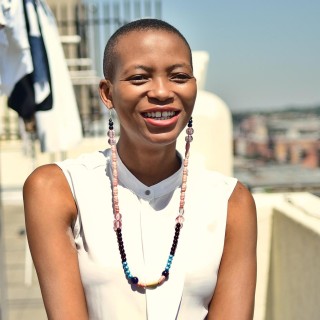 Nomna is a change coach, writer and creative entrepreneur living in Johannesburg whose vision is embracing and nurturing the unique mind, body and souls of those who cross her path. Her entrepreneurial journey revolves around people, art and design, travelling, music and food initiatives she is passionate about and writing about these passions.